And I knew this thing was coming. I won’t say this day because it’s more than a day it’s a passage, an endless chapter, a journey through dark and haunted woods with no map. And I know too that someday I’ll say, “When exactly did that chapter end?” Just like I walk through the grocery store now wondering when I bought that last jar of baby food or that last pack of baby wipes.

But like the baby wipes and jarred mush food, this shitshow called preadolescence is on my face, it’s on the table, the windows, under my nails. Preadolescence.

I’m reading about executive function these days. And besides the fact that I keep reading every example of someone with executive dysfunction and thinking, Wait. Isn’t that how you’re supposed to plan a trip (by not planning at all)? Finish an assignment (at the last minute)? Organize your desk (zero organization)? I’m also picking up phrases like cognitive flexibility, working memory, and impulse control.

And so I sneakily spout back these words to the kid who doesn’t get it. Who has never gotten it. Who has always sweetly, humorously, darling-ly marched to the beat of their own drummer.

But it’s not a parade anymore. Or even a band. It’s school and morning routines and yes, actually band practice, but if you don’t bring your music, get in line at the right time, remember your assignment, listen to directions (Ever! Oh my god, the directions!), find your shoes, use a fork for God’s sake, when did THAT become optional, then you’re not playing along. You’re playing alone. And your mom is reporting every misstep to an OT, a teacher, a school administrator, a tutor, how this kid is stumbling along.

In the scheme of childhood development, I’m here to tell you it’s small potatoes. It’s not lack of speech, inability to thrive, years of surgeries and hospitals, lack of cures. But in the scheme of our everyday life it’s me trying to fill an apparently important cup drop by drop but the cup has a leak. Drop, drop, drop. Then drip, drip, drip. What a mess, a thankless, Sisyphean mess.

We were in the car and I was helping to script the apology to the tech teacher for the misunderstanding of rules, and my kid was pushing back, making side comments to an all too willing sibling accomplice. And the weekend played back in my head, the bloodied nose (But he told me to do it!), the sibling crushed in a wrestling move (She started it! You only see me! You never see them!), the lost assignment (Where did you put it, Mom?!), the crappy timeouts (Can I get out can I get out can I get out?! LET. ME. OUT!), and I felt so overwhelmed.

“You’re going to make mistakes! We’re all going to make a million mistakes,” I said, “But the problem is your unwillingness to acknowledge it, to say you’re sorry and move on. In life that’s when you get kicked out of high school, when you get fired,” (I took a moment to acknowledge that in rare cases blustering bullies who never apologize or own their crap can become president but how’s that working out?) “but being willing to apologize and own your weakness, that’s the brave thing, the strong thing.

“Do you remember when your OT held up that colored letter chart and mommy saw the colored letters wiggling and weird too? Well that’s just us. That’s not everyone else. That’s maybe not anyone else. The world doesn’t need to adjust. We do. It can be our strength. But only if we own it. It’s us. It wasn’t your tech teacher who blew up the lesson. It wasn’t his job to punish you more politely or less harshly, to know how to do it. It’s your job to manage your crap.”

A few minutes later I pulled up to school and they all grabbed their bags, their instruments, music. I pulled away wondering what the executive dysfunction fairy left in the backseat of my minivan. And I sighed.

I felt the tears well up. The drop drop drop. The drip drip drip. The cup will never be full.

This will go on forever and never get any better.

Then I cranked the car radio and Dar Williams singing It’s Alright came on.

I know change is a bad thing,

Breaks me down into a sorry sad thing,

Not some iridescent grateful butterfly

Not the power of a mystic silence

I will fight the dizzy spiral of goodbye

Own your own shit, I’d basically said. I had a point. I’m a warrior for my kids, sure, but this isn’t my battle to win or lose. It’s impossible to remember most of the time but there it is. I can’t live this life for my kids. It’s a hard one.

Sometimes I’d give anything for the spooned baby food and the poop-covered onesies (did I mention they were all in diapers at the same time?! Four kids. Oh my god.)

But I forget that even then they had to manage their own shit (although not literally, apparently). I could lead a toddler to a baby treadmill (that’s an actual thing and we had it), and a special muscle cuing body suit made of 26 unique pieces of Velcro and neoprene, and to horse therapy to do sit-ups on a horse, for God’s sake, but I couldn’t make them walk.

I put everything in place I possibly could… and eventually, they all walked. They each did. Some early. Some on time. One really very late. But I just watched them all walk away from my car this morning with backpacks swinging and zippers open and papers flying. I’m the facilitator and witness to this and I can say, they all just walked away on their own two feet. 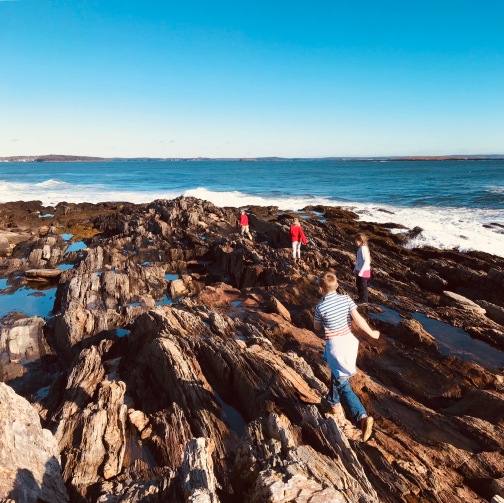 It’s a sad and a strange thing

But it’s time and I am changing

Into something good or bad, well that’s your guess

I’m my own sovereign nation

Dedicated to a transformation

Marching on with this target on my chest

7 comments on “Preadolescence. It’s a Thing.”