Honestly, we usually listen to NPR or our local independent station. But we’ve been trying to expose the kids to more different kinds of music and since one of my children said, “Is this country? I hate it,” it seemed a good place to start. Hating something because you don’t know it has become too easy an answer of late.

It started off sounding like a love song and kind of stayed there. He talks about how the woman looks, maybe like she’s had a break up, maybe she’s a bachelorette or just drinking a bit too much. It’s not a sentiment he invented. In 1996 Dar Williams said it better in As Cool As I Am, and Fiona Apple’s whole grammy-award-winning album Tidal covers it pretty well.

And yet here we are, take a drunk girl home. So sweetly helpful and yet cringingly beyond. That’s how she knows the difference between a boy and a man, Chris Janson says. Because the man tucks her in, cleans up her life dropped on the floor, and leaves her safe, but a boy… he leaves her with a tragically typical #MeToo story that people will say she asked for? (Then technically that boy is still a man, Chris, but he’s also a rapist or someone who’s committed sexual assault, or at the very least, he’s a smarmy dirtbag. Still technically a man though if he’s over 18, but I digress.)

It probably didn’t help that we were on our way home from the Women’s March 2018, local version, one town over. 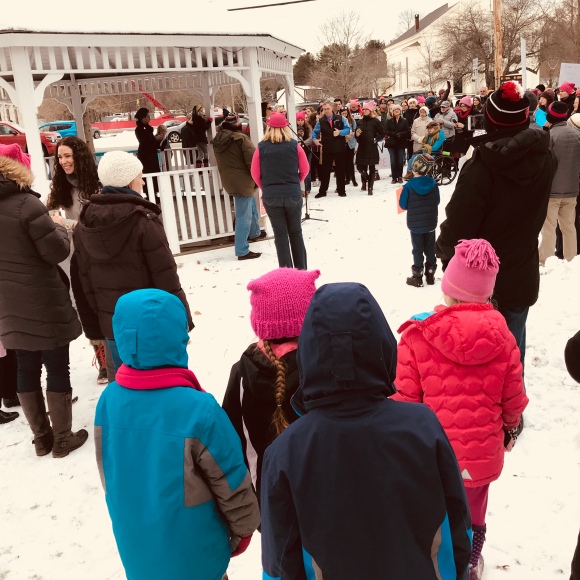 Listening to the speakers
January 2018

We’d stood in the freezing cold for an hour and listened to a variety of speakers, politicians, women who’ve done great things over the last year or in their lives. I saw a friend, the one who waved to me teary-eyed across the school lobby the day after the election. She is now running for office against an incumbent who has been in office for 18 years and whose votes for women’s reproductive health have been poor. She’s never run for office before. She didn’t speak at this rally through myriad reasons that both are and are not complicated.

My girls mostly stayed by me climbing a pile of snow in front of us and looking around at all the women in their pussy hats. After respectfully listening to the first three speakers my boys went off and found bigger boys on the snowy town common with whom they got into a dirty snowball fight.

There was a table set up for children to make inspiring signs, but the bitter cold had mostly dissuaded the parents with children. My girls and I stopped though and made a sign on poster board. I asked them what it should say and through chattering teeth they said Women’s Rights.

“Anything else?” I asked. It starts with us, said one of my daughters. They had me do the drawing and they colored it in and added glitter as the young women around us scurried to clean up the markers and shut down the table.

It starts with us. And with glitter.
January 2018

We headed back to my little snowy hill by the pavillion with our sign and finished watching the speakers, gathered the boys and headed to our car. The sign blew against me as we walked.

And as I climbed into the driver’s seat a woman walked past me on the side of the road and made that sort of harrumphing sound that I usually expect from my mother, and she said, “Women’s rights? Because we don’t have enough?”

I was caught off guard and replied, “I guess we just have to keep an eye on them. Right?”

She harumphed again and continued her walk along the side of the road.

To be honest I wasn’t exactly sure what our sign was about, or why I’d taken my kids to the march. People who have absolute assurance about most things make me uncomfortable. How do we ever really know all of everything anyway? It just seemed important. I wanted them to understand about something. I’m not sure I can always put words to it, and I don’t know why not.

Earlier in the morning one of my children had asked me why women are marching for rights. “Everyone seems to have an equal chance at things,” one of my kids had said.

I replied that so far that hadn’t really worked out for the presidency, most political positions, most corporate executive jobs and so on for example. But that right now the people around them in their school and family and community are working really hard for things to be equitable so that might be how it feels from where they are standing. I wanted to explain the difference between equity and equality, but most adults don’t even get it. I sometimes don’t get it, and I’m always trying to get it.

Listening to politicians and women talk about equal pay for equal work, voting rights, human rights, protection for LGBTQI, immigrants, the environment, I wanted them to see that our work isn’t done, that it’s never really done. And if it ever were, still, we should be vigilant.

I wasn’t really sure they’d ended up understanding any better after the march, what with the cold feet, and the snowball fight, and the harrumphing woman.

We stopped at the bird sanctuary on the way home for no particular reason except for the fact that it was in the same general direction as the march, and the kids have been asking me for weeks to go feed the birds. We walked through the slush and snow to a quiet place and held out hands filled with bird seed and the birds came in unprecedented numbers. 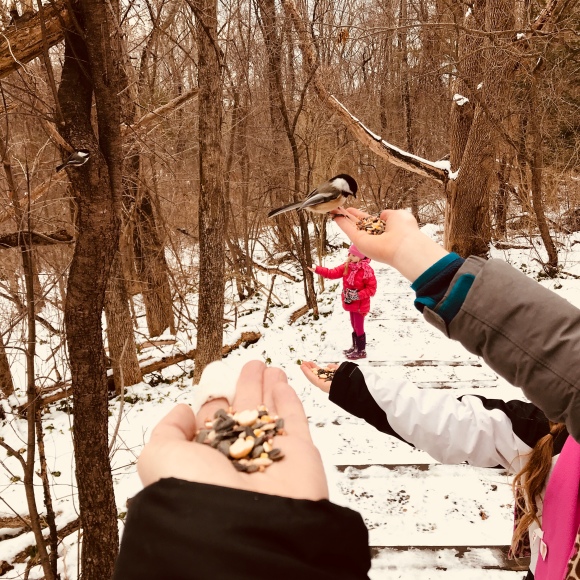 Eating out of his hand
January 2018

Can you imagine? 128 chickadees, nuthatches or titmice had landed on his hand and taken a piece of bird seed and flown away. Woodpeckers and cardinals sat in the trees around us, ever vigilant.

My youngest girl started to cry because she wasn’t getting nearly as many birds to come to her hand.

“Be patient,” I whispered. She stomped in frustration.

One of my sons turned to me. He closed his hand to the birds so they could no longer take his bird seed. Then he whispered, “Mama, she’s the shortest. Close your hand, so she can get some.”

And then so many birds came to her.

When we were done we climbed into the car and finished our drive home, and I turned on the radio and that’s when Take a Drunk Girl Home came on.

Women and girls and allies gathering together in force with our pussy hats and strong words. Women running for office who’ve never run before. A woman harrumphing at the sign asking us to join together to support women’s rights. Boys in a snowball war for their lives. A brother helping his sister get more birds in her hand because she is the shortest. Take a Drunk Girl Home on the radio.

I couldn’t decide which kernel held the meaning for the day. Maybe we never get to decide. It only exists there together anyway. Maybe what we can do is build in more of what we need. Less take a drunk girl home, more listening to women running for office. Less snowball wars, more standing together. Less taking the birds for ourselves, and more making sure that the smallest among us gets to feed them, too.

Waiting for the birds impatiently.
January 2018