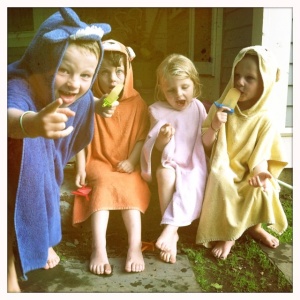 Can you pick out the 7-year-old in this picture?
Summer 2014

I’ve recently come to the conclusion that I don’t like 7 year-old boys. As a 43-year-old adult female, this is neither a shocker nor a tragedy. I mean, it’s a problem easily solved. I’m a grown-up. I have a license. I have a car. I can drive away from every 7-year-old I meet. 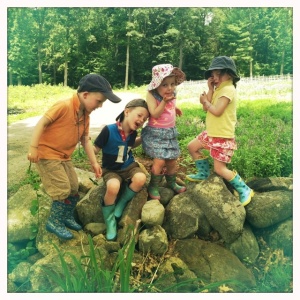 But the problem is, I live with a 7-year-old boy. And just when he stops being a 7-year-old boy I will have a 7-year-old boy/girl twin combo cohabiting with me, both annoying and crazy, looking to me for guidance. And if I survive that? The reward? Wait for it… a 7-year-old girl. Which I’m expecting to be an improvement on the current situation, but still. It’s not ideal.

I should have known this day was coming. Honestly. My friends with boys? I remember watching their kissable, squeezable, adorable 6-year-old boys go through the change. These kids would be all Dr. Jekyll kindness and respectfulness and then BAM! One Lego-Superman-Ninja birthday party later and I’d be looking at my friends thinking, “How are you not noticing that this kid is a total punk?” Straight up Mr. Hyde. And I mean, every time.

The boy who’d delighted in reading to the younger kids was suddenly pretend shooting them with his gun-finger and maniacally yelling, “You’re a loser, dead cootie face!” And if I told him to stop he’d look at me with mean-hate eyes or start to cry. Or both. Unacceptable.

So the 7-year-old I live with? It’s like sometimes he has the evil face of the Joker, the violent intent of Jeffrey Dahmer and the snarkiness of a fifteen year-old girl with PMS.

Today he told me I was mean, that I had a muffin top and that Dad was stronger than me. Which is all true, actually. But still. Cuts like a knife. He knows what will hurt me most. Yesterday I leaned in to give him a kiss and he walked away. Are you feeling this? This has become 7th grade all over again; living with a 7-year-old is like seeing my greatest vulnerabilities and ugliness mirrored in his face.

Up until a few short months ago this was the kid who would invariably slice the love cookie exactly down the middle, striving always to be fair and just. If you asked him who he loved more, he’d say he loved his father and I the same amount. Always. Even if it wasn’t true, he aimed for the middle ground, the place of peace.

But now he says things that are mean and if you call him on it he cries and if you capitulate he acts like he’s doing you a favor. He’s a smooth operator, that one.

And so maybe I’m mourning the loss of the loving little boy who’d hold my face and beg me to lay in his bed for a few minutes more. And maybe I’m mourning the end of the days when I understood how he was feeling, why he was sad, what he wanted, and when I had the power to give it to him. It’s been suggested that I miss my baby, that it’s time for him to be a boy. It’s been said that I can’t control everything. Ouch.

So last night we read this book called Zen Shorts that we found at the Salvation Army while looking for good beach reads. There’s a Panda bear and three kids and each kid learns a Buddhist or Taoist  lesson. Give freely, allow it to just be without calling it good or bad, and leave the burden behind. Let go.

Afterwards I lay down with each child and sang a song in the dark. My 7-year-old wanted to be first, then he wanted to be second. He wanted this song, until I’d sung one line and then he wanted the other song. No, the other song. I could feel his agitation, hear the chokey voice, feel the tension in his chest. On the verge of saying, “Gees! What do you WANT?!” I suddenly thought, “Being seven could not be easy.  This does not look easy.” So I sang him the song he wanted, tucked him in, kissed him good-night.

This morning I went out for a morning paddle on my board. It was glorious, breezy, beautiful. And as I paddled back into the cove, I saw my husband up the hill on the deck, watching me through binoculars, my youngest sitting on the railing. And then my 7-year-old came, running down the hill, across the street, through the field to the beach, just as I pulled up on the sand. “Hey, Mom,” he said. And he grabbed my paddle and marched ahead of me, carrying it back to the house.

Enough, I thought. This small moment is enough. 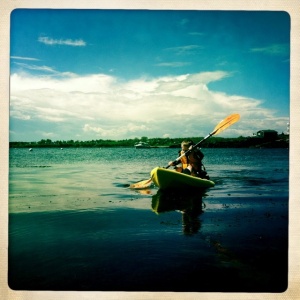 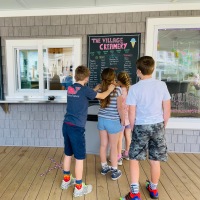 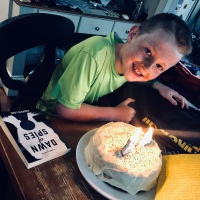 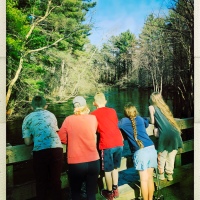 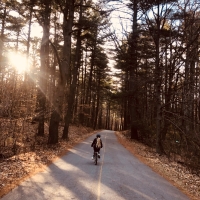