This week is graduation week and there is nothing gradual about it. It comes in like a lion and goes out like a lion, all roaring emotion and event after event. We’re a graduation-ing family; we’re practically professionals. 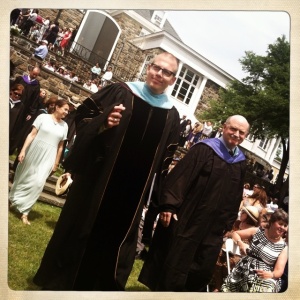 And when I say we’re professionals, I mean it… literally. As a high school teacher, I haven’t missed a May graduation since 1993 when I graduated from college. Not even when I was 9 ½ months pregnant, having postponed Cabot’s birth until after graduation week. I was so large and ungainly, people on stage would lurch a bit when I stood in the audience to sneak away to pee. I’d point approximately to my bladder and mouth “PEE. PEE-ING.” Everyone thought I’d have our baby right then and there, which would have been appropriate, in a way.

Last week, the first of graduations caught me by surprise. Driving up the pre-school driveway with a car blissfully empty, I was making lists in my head:

3. do we have babysitters lined up…

And then I pulled around the bend in the drive and saw this. 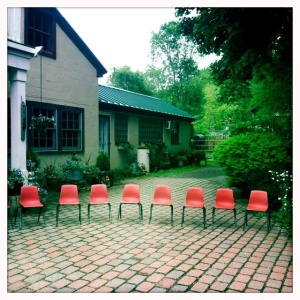 A row of nine empty little red chairs, waiting for two of our kids to “graduate” pre-school, and one other to move to her final year. I gasped. Then my face crumpled. I had entirely missed that this was happening to me, to us, to them. I mean, I knew the twins were graduating, but I’d forgotten that they were graduating.

With the oldest I always expect to cry. He is the first and constantly reminding me that they are moving on, that they are no longer babies. And with the last, well, who wouldn’t cry? When she’s through, we leave that milestone in the rearview mirror. But the middle two, we’re always pushing them forward, holding them behind. And they’re so secure in their two-ness, their camaraderie, that I don’t worry about them transitioning.

But here it was. They were leaving pre-school, absolutely ready for kindergarten, the great unknown. They know how to make friends, follow directions. Most days Mica can even manage his pants himself, although they’re generally on backwards, with the waistband sort of rolled and at least two inches of underwear showing. And Reid is majestic, reading and writing and telling stories. You will notice her, you can’t help but notice her. And if you don’t, she will hit you in the face or shove you to the ground. And then, then you will certainly notice her. 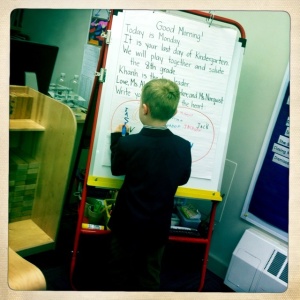 Our current kindergartener, Jasper, returned home from witnessing the 8th graders at his school graduate and he told us of their amazing talents in music, of the awards different kids won, including an art award. Mica piped up from the back seat, “Dat will be my awahd. I’ll win da aht awahd.” Absolute confidence. With confidence like that, who cares if your underwear shows and your pants are on backwards with the fly down? Because he doesn’t, and you won’t.

Our professional graduation-ing stature means we go to graduation events for my husband’s high school, and we go hard. We’ve had five babysitters in three weeks, most of them doing three nights of sitting each. In an effort to continue seeing our children, and to initiate them into the pomp of graduation, we’ve begun a tradition. Each major event we bring one child. I sit in the audience as prizes are awarded or baccalaureate speeches are read, as kids process or the honors jazz quartet jams. Then we take that one dressed up child to a restaurant and we talk to just them. One on one. They talk about this incessantly throughout the year, remembering their graduation “date” with Mama and Dada, pointing out their restaurant every time we pass. 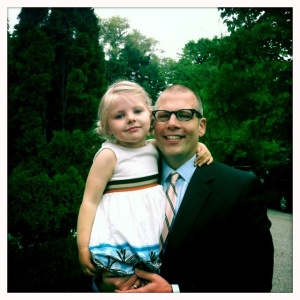 This year Cabot attended the senior dinner, because all you have to do is look cute and hug people. She invented that. We took her out to Cheesecake Factory afterwards. What with the mirrors, the gluten-free menu and the TVs over the bar, she was in heaven. 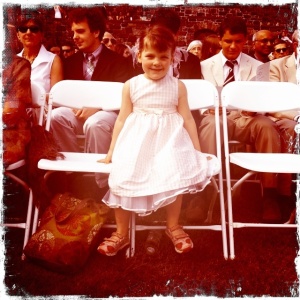 Then Reid went to prize night (and a gourmet rum bar.) Prize night goes on forever, but there’s tons of clapping so she can say something loudly every two minutes. Thank god I put bike shorts under her dress, because she squirmed so much two faculty members complimented her on those bike shorts. 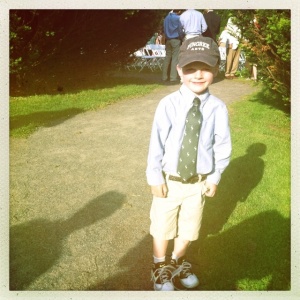 Mica went to baccalaureate (and a Mexican restaurant) because I think he gets the celebration and solemnity of the event, the four speakers telling their stories, the two pieces of inspirational music. It’s short, sweet, and cerebral. 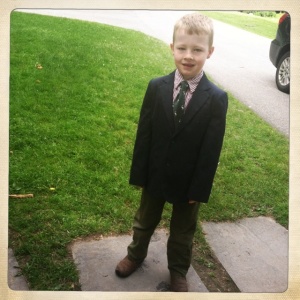 Lastly, Jasper went to graduation (and out for ice cream.) Because graduation is in the heat of the day and it goes on forever. No one else could survive it. And I think he gets it; his father’s big speech, the names being read off one at a time, the tears from parents as they watch their kids graduate.

And at each event, at least once, I feel the chokey voice and quiver chin fighting to take over my face. I stroke the backs of the boys’ necks where the short fuzzy hair grows. I pat the lightly padded arms of my girls and sniff their hair like a summer-day-baby-shampoo drug, like I can’t live without the smell of their child-heads filling my lungs. 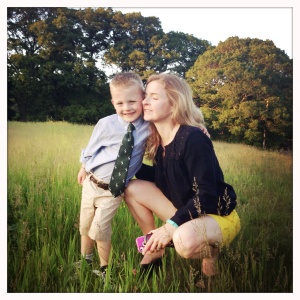 Mama and Mica, holding on to the present
June 2014

I look around at the parents hiding behind cameras, and I see their slightly shell-shocked faces. How did this day come to pass? How, amidst the lists they have in their heads and the driving here and there, did they miss the row of red chairs in the courtyard, their children preparing to move on? How do we all?

Yesterday they bent to smell the tops of their childrens’ heads and today they fastened boutonnieres, reached up to straighten ties or replace a bobby pin.

Because it goes like that, graduation week. There’s nothing gradual about it.

18 comments on “Graduation-ing (It’s Not Gradual)”

This entry was posted on June 11, 2014 by jgroeber in The Children, Uncategorized and tagged baccalaureate, graduation, growing up, memory, motherhood, pre-school graduation. 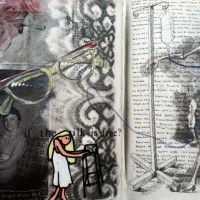 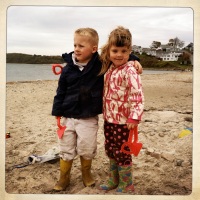 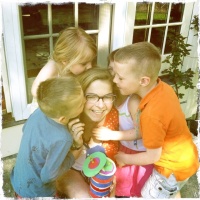