I’ve begun reading mama blogs and the whole awesome-mother-thing has gotten worse. You know, the “how can I be all that I can be” thing? How am I teaching my kids? How am I helping them learn who they are through beautiful holiday traditions? Sigh. That’s the thing.

On a recent blog post I read a list of 50 (FIFTY!!) “Magical Family Christmas Traditions” people (all mothers, if we’re being honest here) sent in. Everything from the sweetly detailed remembrances to the heart-warmingly altruistic. Ack. These people are good, and I mean good. Read one at a time and it’s stunning; read them all at once and it’s too much. Too MUCH!!

We get a tree, sure. But some years we cut one down ourselves; this year we went to the only place with one big enough to suit my husband’s vision of “the most beautiful Christmas tree ever” (and apparently size matters here, my friends.) We get wreaths for the garage, but this year our favorite place for wreaths was closed so we kept driving. One year we catch Santa at the local library and the next, we find him at the organic farm stand.

But I have one original Jen Groeber tradition, and it is precious to me. It may be one of the best things I invented ever.

It began maybe fourteen years ago. I was a fresh face replacing a long-standing art history tradition in a superlative art department at an uber-competetive boarding school. I was jazz hands in everything I did. I was the lead dorm parent of a dorm with 79 girls (jazz hands.) I was coaching two sports and training to run a marathon (jazz handsss) and I had a great idea for Christmas gifts (jazz handssss!) In this awesome art department, among folks I quickly loved, I suggested we each make ornaments to give to everyone else in the department. Make three, get three. 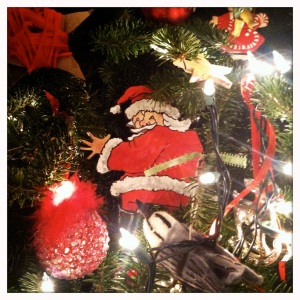 These were the first ornaments for my first tree, and I still have two.

The following year, I’d moved to Philadelphia to be near my boyfriend, who quickly became my fiance (it pays to move to Philadelphia) and we had a lovely fresh tree, but no ornaments. So we had a dinner party and told everyone to bring an ornament. For some reason, I only remember one person bringing an ornament, and this was a huge pile of small origami paper cranes, of which I still have three. That Christmas, I bought a glue gun and beads and started making ornaments of my own.

The next year I sat with three girlfriends, glue gun in hand, and we made a couple ornaments to share and to hang on our newlywed trees.

Balls and Feathers was born.

Each year I invite a handful of friends, colleagues, and neighbors to come to my house, glue gun in hand, and make ornaments. It’s always a last minute invite, because I can never pick the weekend and honestly, I’m afraid no one will come.

One year, my hormone-filled fourth year of trying to get pregnant, no one came for the first hour. Crying, I called my high school best friend who was stuck in traffic between her south Jersey home and my Philadelphia one, and I told her to hurry up. Another friend was waiting in line at the grocery store with an appetizer for the party. “Drop the appetizer and get here now,” I cried. And they both did. 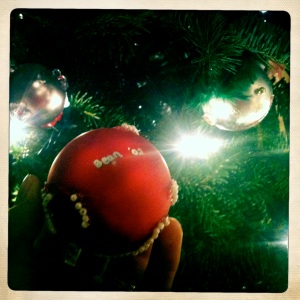 This year, the night before Balls and Feathers, I was hurrying, hanging ornaments on the tree, watching for news of the impending snowstorm when the tree began tipping. I grabbed hold of that fifteen foot tree and nearly rode it to the ground. The next day snow, snow, more snow and my babysitter canceled because the roads were too slippery. At 1 pm I sat contemplating the yule log in the fireplace, the open bottle of prosecco, the pile of ornament supplies, and I considered… will they come? 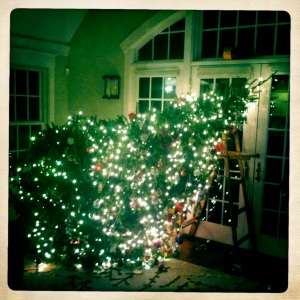 First a husband came, sent by his wife, to lift the tree. Then a friend arrived, to screw the tree-holding-screw into the wall and assist with wiring. And then, well, as in the loveliest Hallmark Channel Christmas movie, the doorbell started ringing, the jackets were thrown in the closet and Balls and Feathers happened, with old friends from the pre-school parking lot, new friends from the kindergarten mixer, a couple people from my husband’s work, one from the farm stand and three from my printmaking class. 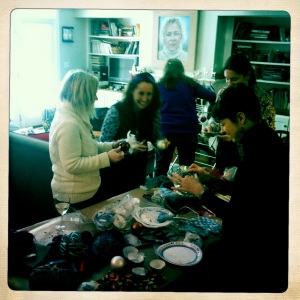 They glued and feathered, baubled and glittered, frenetically for four hours. They initialled and dated their art and then, in a flash, they were all gone. (Then, as always, my kids commandeered the supplies and created their own wacky ornaments for the next hour, too.) 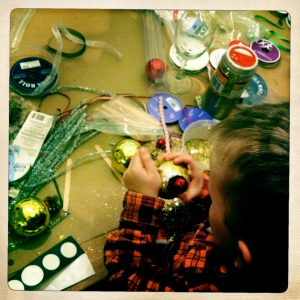 Mica, at the After Balls and Feathers Craft Hour, 2013.

And there the tree stands, tethered by generous hands, and ornamented with lovingly crafted, sometimes craptastic, always memorable, baubles from over the years. BP 2007. Mica 2011. Bean 2000. HNC 2012. Mollie 2013. It’s so lovely, I could cry. I have made friends; I have decorated a tree; these are my memories. Best of all, there stands the evidence that I have created at least one new tradition that is sure to last. It’s not called the 14th Annual Balls and Feathers for nothin’. 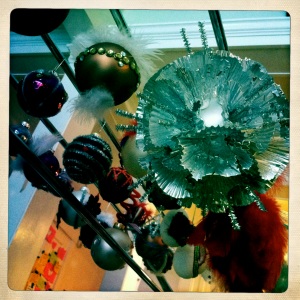 Wishing you a holiday season where your balls are adorned with glitter and feathers by all your dearest friends over a glass of white wine and a table of craft supplies.

10 comments on “Balls and Feathers”