The Song and My Father 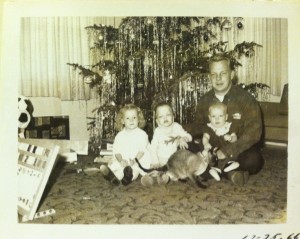 It finally happened. Today, driving in the minivan, I heard the Christmas song that makes me cry every time I hear it. Tim has sat me down in July saying he wanted me to hear this new song he really likes, has put earphones on my ears and played it, this Christmas song that is not new and that he doesn’t really like. In July. And I have cried, an actual sniffling, fanning your face, crinkly chin cry, that always ends with us laughing (me through tears) at my Pavlovian response to this song.

I am now the age my father was when they took his life away from him. My mother’s December 1978 Christmas letter reads:

“Things went smoothly until this week has seen Bruce arguing with a loaded gall bladder. The gall bladder is winning and in a few days, if not sooner, “stoney” will be parting with some of his original equipment.”

Her 1979 Christmas letter begins: “Many times over the last year I have rehearsed writing this letter; trying to make it sound believable. The past year wasn’t a good one…”

These two things, the song and my father, will not be separated.

My father was 42 the winter of 1978 when he went into the hospital to have gallstones removed. Mid-surgery, the doctors came out to my mother in the waiting room and said my father had terminal pancreatic cancer. Given the option to have him sewn up to return home to die or gutted with an experimental surgery removing his gall bladder, pancreas, spleen, most of his stomach and so on in order that he might possibly live, my mother chose the surgery.

Of course, I’ve reflected on this over the years from my point of view, remembering my mother telling us that my father wouldn’t be home for Christmas and all of January and February. I recall learning how to give him his insulin shot; staying inside during the following summer every day to watch Butchie so that my mother could take my father back to work; listening to the pump on his feeding machine every night as he slept in the living room downstairs. I’ve definitely reflected on that, as only a self-referential artist in grad school can… ad nauseam.

I’ve also thought about this from my mother’s point of view in recent years. Given that choice, having Butchie and the rest of us, between the ages of 17 and 5, all waiting at home, what would any of us have done? And her, with no education, no real job skills, bullied by an eager young doctor with a new procedure. (My father didn’t actually have cancer, by the way.) I think of her standing in that hospital often, and all the days and nights that followed for the next 18 years while she held my father up.

But I’m ashamed to say that this winter is the first time I thought about it from his point of view. I could be my father this Christmas. Except he was the only breadwinner. And he had five children, two with significant disabilities. My father went into the hospital for a minor surgery and returned home 70 pounds lighter. He would be tube fed for the rest of his life with a nasal gastric tube taped to his face for nine years, would have small strokes and large ones, ulcerations and bleeds, infections and nausea. To say they took his innocence and inner peace would be an understatement.

It took awhile for him to return to us, but mostly he did. He loved to eat, and so he ate. Every night. He pinched my Mom’s bum when she walked by. He watched war movies and snuck cigarettes and hid vodka for extra after-dinner drinks at our neighbors’ houses. He listened to Benny Goodman at top volume, wore the most colorful argyles pulled up to his skinny knees, even with swim trunks, and he had teddy bears he’d talk to when he was feeling especially sick. He loved everything about Thanksgiving and Christmas, and he read The Night Before Christmas to all of us every year, no matter what, no matter how old or disenchanted we grew. Don’t get me wrong, he was no Mother Theresa, but he lived as fully as he probably could.

Christmas, 1991
Reading Twas the Night Before Christmas,
Dad’s IV pole in the background

My dad did not like this Bing Crosby/David Bowie song. I remember sitting on the couch with him when I was nine or ten, craving connection, pointing to the MTV video and saying, “Oh, Dad. Look at this! You’ll love this!” And although my dad loved Bing Crosby and he loved Christmas and he loved me, he had no place in his brain for David Bowie. None. I think he said, “What is this shit?” (He also loved the word shit.)

I am now the age my father was the year they took his life away from him. And no matter how awful he felt (his last words to my mother were “Shit’s up.” which meant he was feeling lower than shit… ), no matter how hard things were for the next eighteen years, he hauled his weak body and strong spirit through four high school graduations, four college graduations, a med school and law school graduation, and two weddings. He read the Night Before Christmas for eighteen more years. Could I have done it? Hard to say.

The original mash-up, David Bowie singing Peace on Earth and Bing Crosby singing Little Drummer Boy, two people who didn’t know each other and probably didn’t understand each other, sitting around ostensibly on a Christmas Eve in the late 70’s, making room for each other’s shit. I can’t explain why but it still gets me every time.

19 comments on “The Song and My Father”